Intranasal Therapy for Treatment and Prevention

In those globally challenging times, SipNose offers its innovative intranasal delivery product as a superior delivery of anti-viral agents (virucides) and vaccines.  SipNose is seeking to collaborate with companies who have effective drugs or formulations, and which joined the effort to cope with the worldwide coronavirus pandemic.

SipNose proposes a safe and non-invasive treatment to reduce the spread of the SARS-CoV-2 by mitigating COVID-19 infections at the virus’ primarily entry point to the body – the nasal cavity. SipNose treatment will result in an effective reduction in probability of individuals to get infected and to infect others.

COVID-19 and the Nasal Cavity

Since initial spread of the COVID-19 pandemic, the role of the nasal and paranasal sinus cavities is increasingly recognized for SARS-CoV-2 symptomatology and transmission.  In symptomatic and asymptomatic patients, nasal swabs have yielded higher viral loads than throat swabs, indicating that the nasal epithelium is a critical portal for initial infection, as well as an exit point for viral shedding and retransmission.

The virus is primarily spread between people during close contact, often via small droplets produced by coughing, sneezing and talking. The droplets can remain in the air for up to three hours and then fall to the ground or onto other surfaces. People may become infected either by direct inhalation of those droplets or by touching a contaminated surface and then touching their face and nose.

Recent work has shown that SARS-CoV-2 utilizes its S1 spike glycoprotein for attachment to and infection of host target cells. Infection by SARS-CoV-2 is also known to be dependent on two host proteins for cellular entry and infection, the receptor protein ACE2 and the TMPRSS2 protease that can activate SARS-CoV-2. Angiotensin-converting enzyme 2 (ACE2) serves as the cell surface receptor for SARS-CoV-2, which binds to the S1 spike glycoprotein and is required for cellular entry of the virus through endocytosis. ACE2 and TMPRSS2 are highly presented by nasal cavity mucosal cells and thus the nasal cavity serves as the most likely route of infection and proliferation of the virus following contamination (Sungnak, W. et al., Nat Med 26, 2020).

As opposed to most methods of fighting the COVID-19 pandemic that are aiming to treat the progressive stage of the disease when systemic and  pulmonary infections by the virus are already present, SipNose is proposing a therapy at the early stage of the infection by reducing the viral load (the titer of the virus) in the nasal cavity.

Locally reducing the viral load in the nasal cavity as a post exposure treatment is highly beneficial for several reasons:

The SipNose delivery platform can be adapted to suit a wide range of antiviral agents to fight against the COVID-19 pandemic.

SipNose first choice for a product with a short time to market and high probability to contribute to this fight is the IN NO based therapy.

Nitric Oxide (NO) is known to be an important messenger molecule naturally produced by the body that plays key roles in a wide range of biological processes including neurotransmission, vasodilatation and immune responses.  The therapeutic utility of NO has been widely studied, and NO was named “Molecule of the Year” in 1992 (Science vol. 258; 1992). Inhaled NO (iNO) is FDA approved for treating term and near-term neonates with hypoxemic respiratory failure and is also widely used to treat acute respiratory distress syndrome (ARDS).  The safety and tolerability of inhaled NO as a treatment for its positive effect on the respiratory system is well studied and known.

NO as antiviral agent to fight SARS-CoV-2:

In 2004, during the SARS-coronavirus (SARS-CoV) outbreak, a pilot study showed that low dose (max 30 ppm) iNO for 3 days was able to shorten the time of ventilatory support (Chen, L. et al., Clin. Infect. Dis. 39(10), 2004). At the same time, NO donor compound S-nitroso-N-acetylpenicillamine (SNAP) was shown to increase survival rate in an in-vitro model of SARS-CoV infected epithelial cells.  Based on the genetic similarities between the SARS-CoV and SARS-CoV-2, similar effects of NO are expected.

SipNose INNOVaTe product will allow 3-4 times per day use to treat the virus directly at the upper respiratory regions in the nasal cavity at the very early infection stages and up to several hours post exposure to reduce viral replication.  The treatment is a self-administrated nasal spray procedure, that takes seconds and does not require any professional skills. Therapy potentially will include the combination of:

This therapy approach can be utilized to reduce disease symptoms and progression in individuals who are exposed to the virus and also to reduce the risk of retransmission and contamination as the world population begins easing the restrictions of social isolation. Devices are portable, pocket sized and are easy to use any time and anywhere. 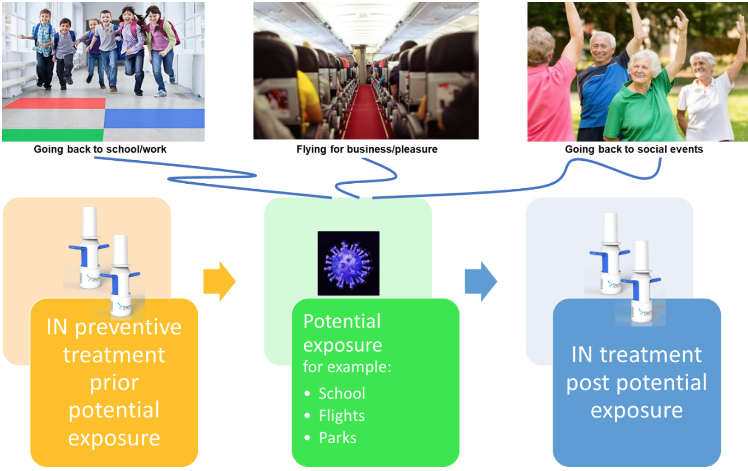 SipNose has successfully completed an in-vitro proof of concept trial to evaluate the antiviral activity of NO-based therapy using its unique delivery approach.